Admittedly it is hard to look at result trends in speed skating. In the early days the trends were interrupted by the Great Wars. In the sixties improvements in outfit and artificial ice rinks had a great influence on the progression of the results. In the seventies the Medeo track had more or less sole rights on the outstanding results. In the eighties the skaters moved indoors and in the nineties the klapskates revolutionized the sport.
However, since the new millennium started no major changes in the way the athletes skate has occurred. It is true that almost exclusively Kerns or Calgary is a prerequisite for top results, but those ovals are basically open to anyone. We have thus made an effort to analyze the best results during the period 2000-2019. As an example, in the diagram we have plotted the season best results for the ladies 1000m during these years. 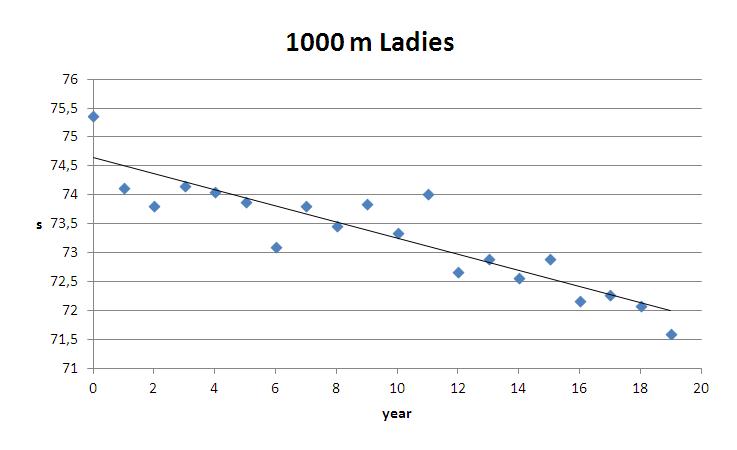 The results, which are furthest below the fits, i.e. percentage wise, are Kramer’s 5000m and Klassen’s 3000m. In our view they could thus be called the best races of the new millennium.
In the table below the slopes of the straight line fits are summarized as the time gained per season, and the same normalized per 500m. By regarding the results to be random fluctuations around the fits, even if this is strictly speaking not true, we can estimate the uncertainties of the values. 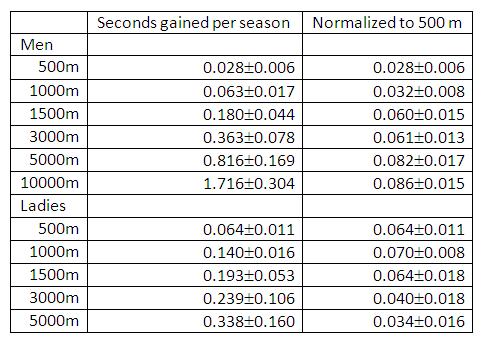 For the men the normalized gains increase with the distance, whereas for the ladies the trend is the opposite. If the trends continue we might expect new world records during the coming years, especially on the longer distances for men. We might expect that the 6 minutes limit on the men’s 5000m will be broken during the season 2022-2023 with a time of 5.59.65. It may however happen even earlier.
The next table shows what happens if the method is slightly changed by instead of using the best result from each season one takes the average of the 10 best performances. Also indicated are the seasons which are furthest below the line fits. 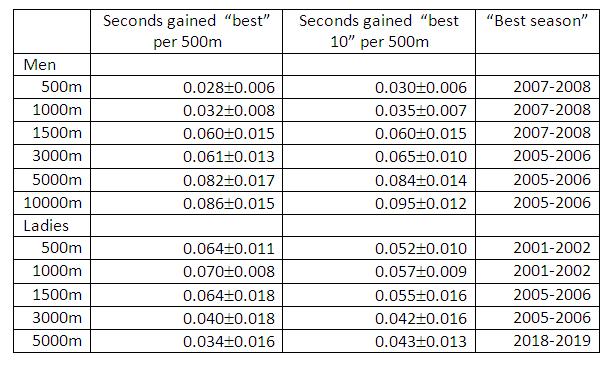 A comparison between the two methods shows that although the gains have changed somewhat, the general trends are the same; emphasized for men and somewhat weaker for the ladies. The changes are well within the uncertainties.
As mentioned in the beginning it might not be meaningful to apply these calculations to earlier time periods. Nevertheless, for comparative reasons, we finally show the gain in seconds per year and 500m for the periods 1990-2009 and 1980-1999. Note that for the ladies 5000m only the years from 1982 were considered. 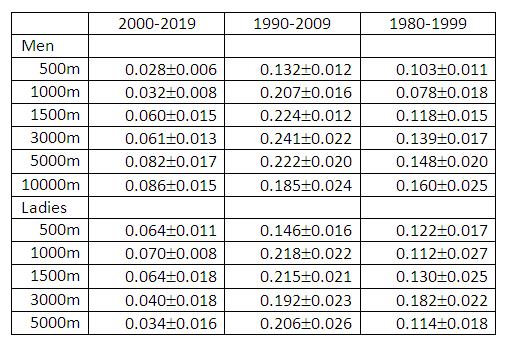 As can be seen, the gains in the period 1990-2009 are extremely large, strongly influenced by the introduction of klapskates. The gains do not show any clear distance behaviour.
If we look at the gains during the 1980-1999 period we see that they are still large, to a large extent due to the frequent improvements of the conditions for the skaters, emphasized by the klapskate introduction at the end of the period. The trends for the male distances are similar to the trend of the millennium period, whereas for the female distances there seems to be no clear trend.